Beth was losing weight. She wasn’t trying to, but when they weighed her at the doctor’s office she found she was 15 pounds lighter than her visit six months prior. Beth was pleasantly surprised. She had spent the greater part of the last three decades trying to lose 15 pounds, and here it had happened on its own, as if by magic. 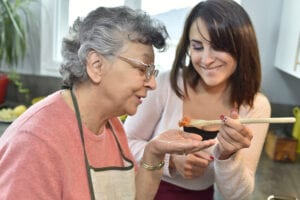 Her doctor, however, was concerned. “That’s too much weight to lose without trying,” he said. “Unintentional weight loss is a sign that something is amiss. How are you eating?”

“Fine,” Beth shrugged. “I live alone and I don’t always feel like cooking anymore. It’s gotten to be too much trouble with the arthritis in my hands. But I still eat as much as I need. I’m not as hungry as I used to be… but I’m not as active, so I’m sure that’s to be expected.”

“Oh, I have a little yogurt in the morning with my medicine. I usually eat a sandwich or something for lunch. Sometimes I’ll eat a can of soup at dinner.”

He looked at her ankles. “Your swelling is much worse than it was last time I saw you. It could be a result of the high levels of sodium in your soup. Swollen legs can weigh quite a bit. It’s likely that you’ve actually lost more than 15 pounds of true weight. We’ll adjust your medication and once the swelling goes down we will be able to tell for sure. In the meantime, you’ll need to start taking in more calories and less sodium. Is there any way you can replace the canned soup with homemade soup?”

“I used to LOVE homemade soup!” Beth smiled to herself at the memory. “I can’t really cook anymore between my eyesight and arthritis. Plus, I don’t know how I’d manage the store. Right now, I have to take the bus. I can grab yogurts and soup, but I don’t think I could manage an actual shopping list….” Beth’s voice trailed off rather sadly as she considered the situation.

“I want you to try homecare,” suggested the doctor. “If you have someone come in once per week they can drive you to the store, help with shopping, and then help cook a big pot of healthy soup that you can eat from all week.” Beth had to admit it sounded interesting. Two months later, Beth reported for a follow up appointment with her doctor.

“Well, your legs look great. The swelling is much improved. And your weight is up two pounds. That’s good news. What are you doing differently?”

“I set up homecare, like you suggested,” responded Beth. “I enjoyed my homecare aide so much, I asked her to come in three times a week! She’s a hoot! Mondays, we look at recipes and work out a shopping list. Then she takes me shopping. Tuesdays, we make a big hearty soup, and divide it into containers for each day. Fridays, we make a quiche or breakfast casserole, and divide that up for the week too. It’s been great! Not only am I eating better, but I’m feeling a lot better too! I love her company, and I love being able to cook again! I never thought I could, but with her doing all the heavy work, it’s actually working well! I can’t believe how much my life has improved since homecare came into the picture!”

If you are considering Homecare Services in Mansfield OH, call the caring staff at Central Star Home Health at (419) 610-2161.  Providing services for families in Mansfield, Lexington, Bellville, Crestline, Galion, Shelby, Ashland, Ontario and the surrounding areas.