Each year, elderly men and women get inundated with calls from people claiming to be with the IRS. The calls say the person hasn’t paid enough in taxes or something of that nature. Seniors are directed to share personal information or send money via gift cards. 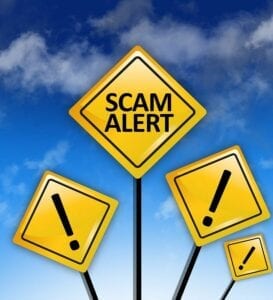 As more people catch on, scammers change the IRS scam. There are currently several versions of the scam out there and some have changed by using a technique called spoofing to make it look like it’s really the IRS’s number that’s calling. Don’t let your parents fall for any of these tax scams or their changes.

Calls and emails go out after a natural disaster asking for donations to help the victims and discuss how it will help reduce their taxes. Don’t let your parent donate money that’s solicited in this manner. Scammers “collect” the money while posing as a charitable organization, but they’re pocketing the money.

One of the latest IRS phishing scams involves the Taxpayer Advocacy Panel, which is a legitimate company, but its name is being used by scammers. This scam comes as an email that provides an IRS link and asks for personal information like name, account numbers, and an SSN. If your parent gets this scam in an email, have them forward it to phishing@irs.gov.

The typical IRS scam has a new twist. The caller ID information lists the IRS Taxpayer Assistance Center or another official IRS division or service. Seeing that the call is from the IRS, people are fooled into believing it’s really the IRS and there’s a problem.

Sometimes, the spoofing call is a robocall. The computer touches on the issue and gives a supposed IRS number for the victim to call at their convenience. When they answer, they get a system that makes it sound like it’s really the IRS. They’re directed to the right person and the scam begins.

Your parents may feel it’s important to answer the phone. They were raised in a time when it was impolite to ignore a call. They may answer out of loneliness. Hire elder care aides for companionship services. When your parent has elder care providers for socialization, they’re less likely to engage with a stranger on the phone.